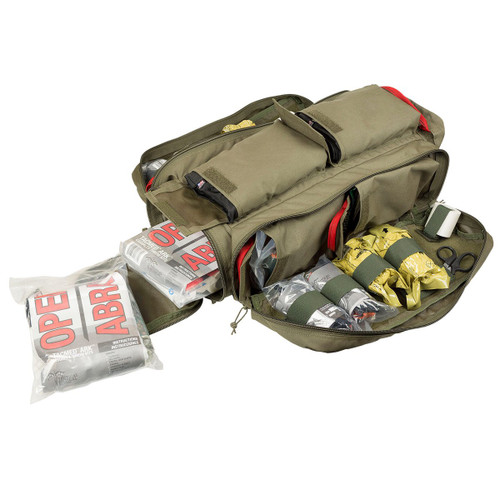 The TacMed™ Warm Zone/School Resource Officer Active Shooter Response Kit (WZ/SRO ARK) is designed to meet the needs of the medical responder or SRO providing care in the warm zone. The WZ/SRO ARK, a complete redesign of the standard ARK and ARK Evacuation Kit, carries more lifesaving interventions, is easier to deploy, and incorporates features based on countless training events and actual responses.

Accessing the Casualty Throw Kits is easier with the addition of a red pull handle that can be manipulated from strong or weak side. Once open, the throw kits can be tossed to other responders and even bystanders due to the bilingual just-in-time trauma instructions found inside.

The WZ/SRO ARK also excels as a rapid extrication platform by simply replacing the casualty throw kits with the Rescue Task Force Litter, adding to the two Ultralight Poleless Litters that already come stocked on the outside. The upgraded side panels feature rip-away and throwable pouches, mounted horizontally so they can be accessed by your team without having to take the bag off your back. Outside pockets provide quick access to hemorrhage control devices, poleless litters, or triage equipment. The active shooter environment has forced first responders to adapt to new and dynamic operational environments, and the tried and tested ARK has adapted into the WZ/SRO ARK to fit those needs.

Bag can also be purchased seperately.